Back to Our Fell Ponies

Articles below which were not written by Mary Jean Gould-Earley have been reproduced with permission from the authors and/or publishers. 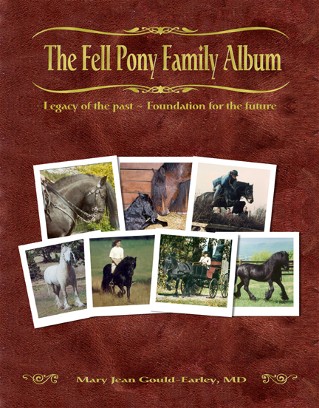 A copy of the article published in the Equine Journal was also published online at  http://www.equitrekking.com/index.php/articles/entry/the_fell_pony_a_rare_english_treasure/ on July 8, 2006 and February 25, 2010.

This feature article about Fell ponies was published in Young Rider magazine in July/August 2004.
It was also reprinted in the Fell Pony Express, Vol. 3., No. 1.
Click anywhere on image below to download full article as an Adobe pdf file.

If you don't have Acrobat Reader, download a free version by clicking on the link below:

north country where feed is always at a premium, the Fell requires less keep than most horses and ponies, and given sufficient shelter, will live out in all weather. Generally, the native breeds were named after-their local habitat and in relation to the work for which they were bred ... thus the name "Fell" or hills.

The Romans, in their endless search for conquests, first landed on the shores of Britain around about 55 B.C. A considerable number of Friesian horses were imported into the north of England either by the Romans or by mercenaries in their employ. Eventually when the Romans withdrew from Britain to go to the aid of their besieged home city of Rome, they left behind about one thousand Friesian horses, most of which were stallions, and which were bred with the native ponies. From these not only the Fell was bred but also the Old English Black (now merged into the Shire Horse) and the now extinct Galloway and Fen ponies.

The Fell Pony's similarity to the Friesian horse has always been striking. Apart from looking very much alike, the Friesian horse was, and still is, noted for its ability to trot, and this characteristic was passed on to the Fell Pony, which soon attained fame likewise for its speed and stamina at this gait. There is no doubt that the Fell Pony and the Welsh Pony were the foundation for the modern Hackney Pony with its extravagant high stepping action (from A History of British Driving Ponies by Anthony Dent and Daphne Machin Goodall).

The present day Fell Pony stands up to fourteen hands, which is the height limit, although most average thirteen hands two inches. The head should be neat and pony-like and set on a fairly long neck which together with well laid back shoulders gives the rider a good length of rein. Large or coarse heads should be avoided, and a pony with a short, thick neck will never be a good ride. The ribs should be well sprung and the loins strong. The quarters should be muscular and powerful and the hocks well let down. Good legs are one of the qualities of the breed, and these must be strong with plenty of bone. Pasterns should slope moderately, and the hooves should be hard and open with the characteristic blue horn. The feather, which extends up to the knee should be straight and silky, and the mane and tail long and thick. 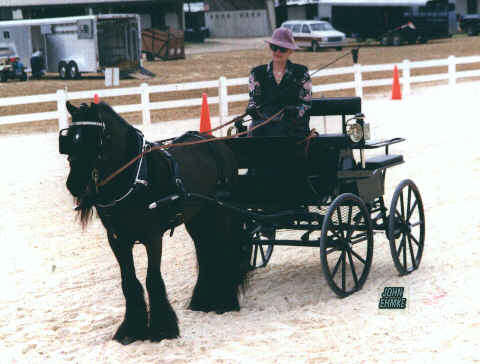 Copyright © 1996 Oklahoma State University Board of Regents. All rights reserved.

by The Fell Pony Society

The Wild European pony migrated to the British Isle approx 1500BC. One type predominated in northern England, and can be credited as the progenitor of the Fell Pony. When crop farming and animal husbandry replaced hunting, wild ponies were drastically reduced to conserve available pasture. In northern England ponies became almost extinct in some parts and those that remained existed in small pockets which encouraged inbreeding and so led to regional characteristics.

By the time the Romans were well established in the North there must have been a definite type of dark coloured pony, standing perhaps just over 13hh, bred within the local catchment area of Hadrian's Roman Wall. Bred from Fresian stallions and indigenous pony mares the resulting progeny inherited the strength and quiet nature of the Friesian along with the hardiness, thriftiness and pony character of the north country ponies. Most of the ponies were black, dark brown or bay, white markings were very rare, and as the size of the pony was governed by the quality of grazing, it is unlikely that ponies exceeding 13hh could have survived on the northern moorland.

The early fell pony type of animal made an ideal fell pony, it was strong and sure-footed, placid in nature and not too big to make loading and unloading difficult while being up to the weight of a full load. Unlike the small native ponies of pre-Roman times, the improved Fell type was large enough for a man to ride and was recognised as a dual-purpose breed.

The Vikings used the ponies for ploughing and sledge pulling, the Normans for shepherding, by the thirteenth century there was a brisk trade in wool to Belgium, and local ponies were used to transport merchandise around the country, old packways can still be seen today.

The advent of the Industrial Revolution was a comparatively rapid innovation but one that, directly or otherwise, affected the whole country. Its initial effect on the Fell Pony came by way of iron-ore mines situated in the north-west of England. Once excavated the ore had to be transported across country to the smelting works of the north-east coast, and because of the uneven topography of the country and complete lack of suitable roads and canals, other feasible methods of transport had to be found. The coming of the railways meant redundancy for many of the pony teams and their dependant tradesmen, within an incredibly short period of time hundreds of ponies disappeared, many being sold abroad for slaughter. Fortunately the Fell Pony was still surviving in it's native Lakeland home, and despite it's dramatic rise and fall at the hands of the industrialists, as a breed it was quite unchanged, for the disbanding of pony teams had not affected the true pony breeding stock at home on the Cumbrian hills.

The affluent 1950's saw the beginnings of the popularity of riding for pleasure, a pursuit that has gained momentum ever since and in its wake guaranteed the future of many native breeds. The number of ponies being registered with the Fell Pony Society has risen gradually ever since.

There is a demand for an all-round family pony capable of carrying all members of the family and versatile enough to fulfil a wide variety of jobs previously done by two or three more specialised animals. In this capacity the Fell Pony is ideal being well up to the weight of a heavy adult, yet quiet enough and not too big for a child. In many respects the present day family Fell Pony is mainly continuing to apply to modern demands, the same adaptability which endeared it to the Lakeland farmers of approximately a hundred years ago.

As a hack and general riding pony, the Fell's fast walk and easy paces make it a pleasant and comfortable ride, and its sure footedness ensures a safe passage over the roughest country. It is possible to ride a Fell pony through places where other lighter bred ponies would come to grief and Fells seem to have a sixth sense which alerts them to possible danger, they seem to know which is the soundest track through soft marshy ground or the safest descent of a rocky hillside.

To test these qualities The Fell Pony Society holds an annual performance trial where the course comprises a varied range of difficult terrain including steep and twisting hills, boggy ground, a watercrossing and several natural hazards such as fallen logs and the like. Fell Ponies are generally creditable jumpers, particularly across country, being both agile and very clever on their feet, which is a valuable asset when jumping "blind" when out hunting. Although most lack the scope to make top class jumping ponies, their abilities are well up to local shows or Pony Club events where many prove their worth.

The rediscovery of Driving as a recreational sport has given the Fell Pony the means of continuing in a job which it has traditionally done for centuries. They are well suited to this work, having great stamina. The fact that the Fell Ponies breed very true to type makes it very easy to find matched pairs than is the case with many of the other breeds. Their main limitation in competitive work is their lack of speed, but their tireless energy compensates amply and several acquit themselves well in combined driving events. A few Fell Ponies are still used in Scotland carrying the stags and grouse panniers down from the moors. Some of HM The Queen's ponies are sometimes used for this purpose at Balmoral while others are used for both riding and driving by the Royal Family. Large numbers of Fell Ponies are used in riding and trekking stables throughout the country because of their docile temperaments and useful size. The Riding for the Disabled movement employs a number as mounts for both disabled children and adults.

All these attributes make the Fell Pony an Ideal Family Pony.

Click Here
or send an email to
joynext@field-galleries.co.uk
to be notified when the next issue
of the magazine is published

THE CHALLENGE FOR RARE BREED SURVIVAL

To learn more about a rare syndrome affecting Fell foals,