Our Fell ponies successfully competed at this prestigious event!  With a total of 40 ponies competing, our bay Fell mare Lune Valley Dolly
was crowned Fell Pony Champion and was 4th place overall.  Laurelhighland Jake, at only 2 1/2 months of age was the
youngest competitor in the class but ended up winning Reserve Champion Fell Pony.  We are very proud of them both! 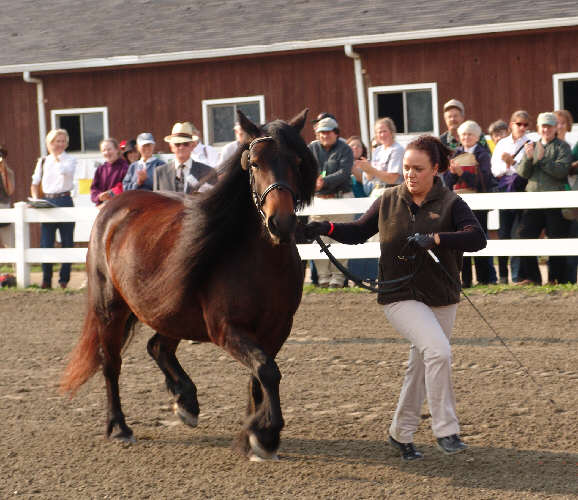 Our Fell ponies once again successfully competed at this prestigious event!  With more than ponies competing, our Fell mare Brackenbank Poppy not only won the Fell Pony Championship but also went on to win the Supreme Mountain & Moorland Pony Championship!  She competed alongside her 2005 filly Laurelhighland Athena, who at only 2 months of age was the youngest competitor in the class.  Athena did her best to steal the show with her antics! We are very proud of them both! 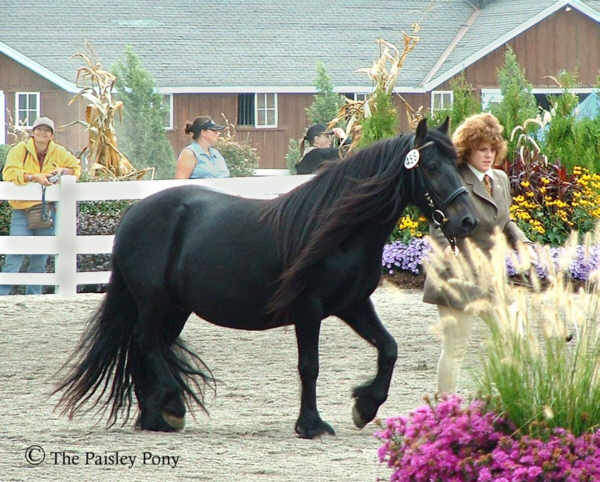 Brackenbank Poppy winning the Fell Pony Championship as well as the Mountain & Moorland Pony Supreme Championship at Dressage at Devon 2005.  Handler is Mary Jean Gould-Earley.  Poppy is a veteran in the show ring, having earned won at many shows in the UK before export.  Photo courtesy of The Paisley Pony. 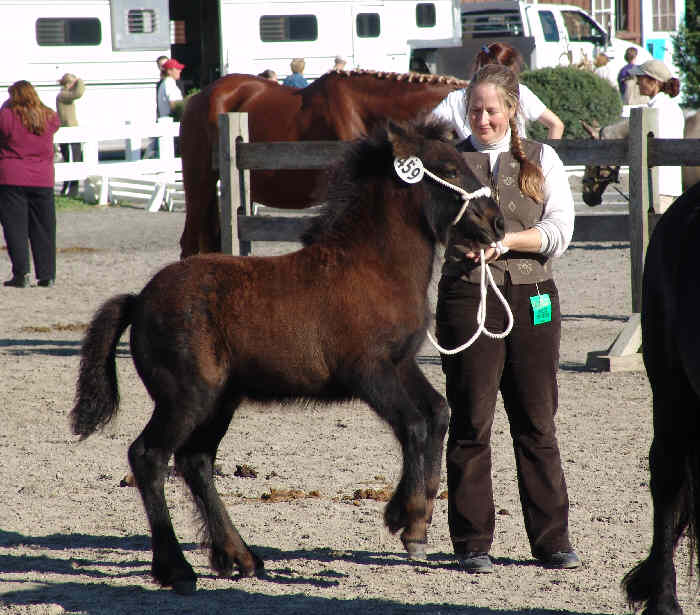 Laurelhighland Athena (2 months old) at her first big show.  Athena has the most AMAZING trot but unfortunately she preferred to show off her "dressage moves" with passage, piaffe, as well as "airs above ground" as shown here!!!!  Handler is Dales Pony breeder, Nan Berry.  We'll have to bring Athena back next year so she can redeem herself. . .!

Waverhead Robbie at
The Carriage Classic In the Pines in Pinehurst, North Carolina, May 2004

Waverhead Robbie had a late start at this show but ended up doing very well.  Although he wasn't able
to compete in time for the Pleasure Turnout, he did great in the classes he entered!  Out of more than
30 competing in his class, he and Nicole Cable took 1rst in Reinsmanship and 2nd in the Working class.
It's a pity he couldn't make it to the first class since he might well have had a shot at the overall championship! 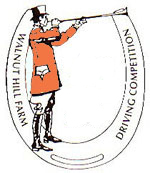 Both of our Fell stallions were in the ribbons at this prestigious event,
and we couldn't be more proud! 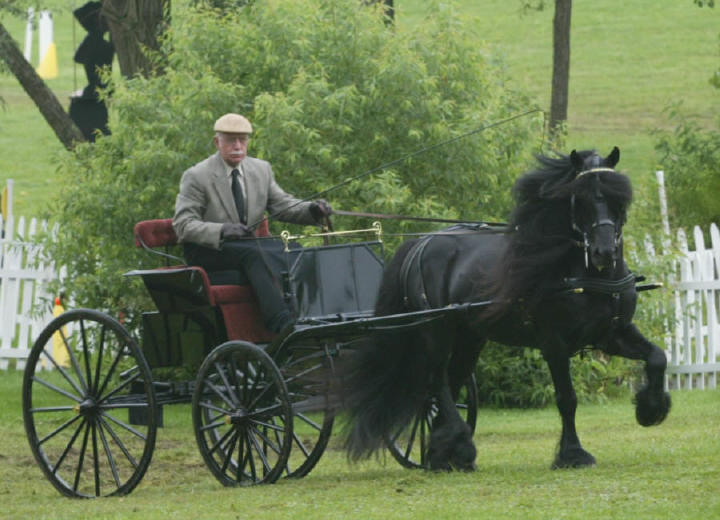 CHECK OUT THE "DYNAMIC DUO"!!! 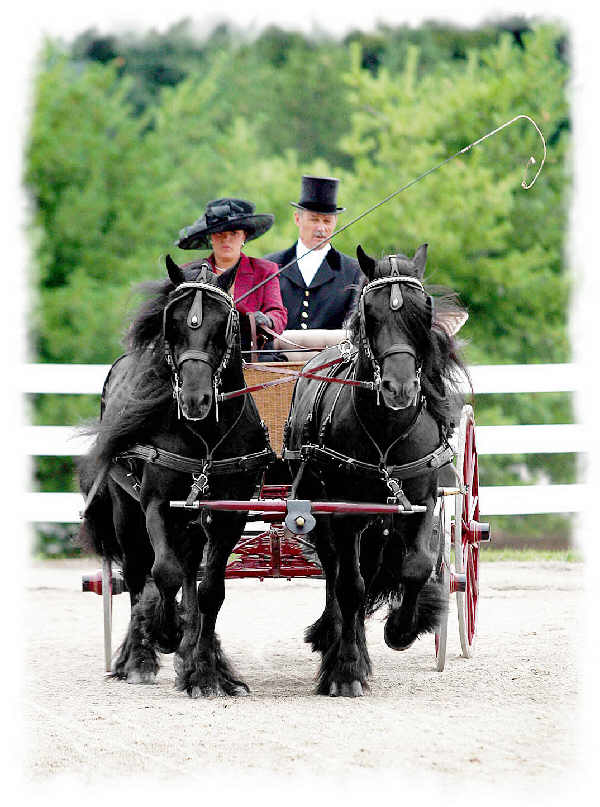 Waverhead Robbie and Waverhead Model IV, our licensed Fell pony stallions, competed as a pair at this prestigious event, and boy did they look GREAT!  They and Nicole took 3rd place in Reinsmanship, which is pretty impressive considering they had only been going as a pair for about 6 weeks!  They were definitely the crowd's favorite in a very large Large Pony class!  The photo here was taken during the Sunday Pleasure Drive - and 8 mile trek to the park and back, with crowds lining the streets the whole way. . . all to see the most amazing collection of horses, ponies and carriages go by!  There were competitors from as far away as Australia.

Model and Robbie were put to a reproduction of a 19th century Demarest Ladie's Wicker Phaeton, driven by Nicole Cable.  Passenger is MJ Gould-Earley.  Harness handmade by Shanahan's Harness!

Our Friesian Stallion "Romeo" makes a surprise debut
at the Equine Affaire ~ Ohio 2003 . . . and successfully competed at Las Colinas Dressage Festival, too! 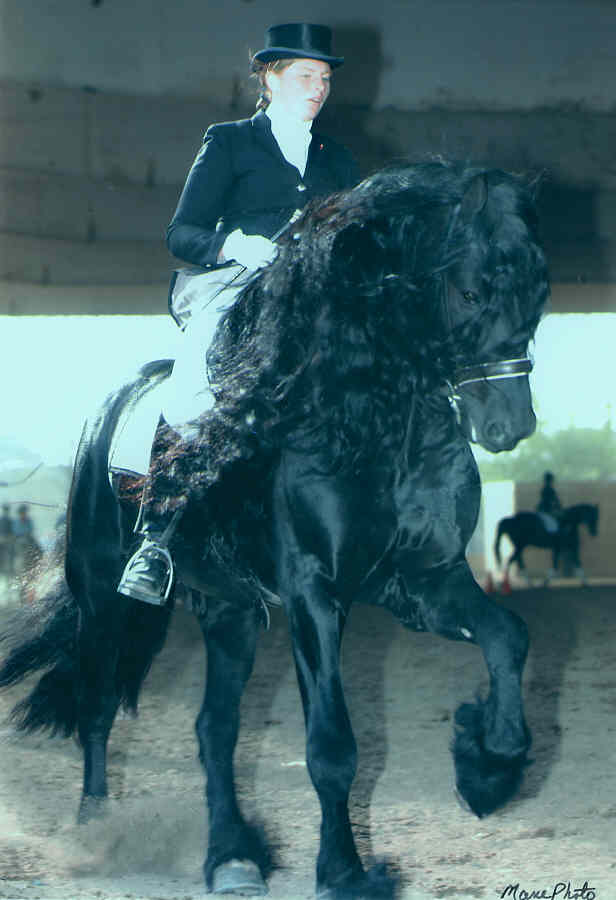 Waverhead Model IV WINS At His First Driving Competition!
The Carriage Classic In the Pines in Pinehurst, NC, May, 2003 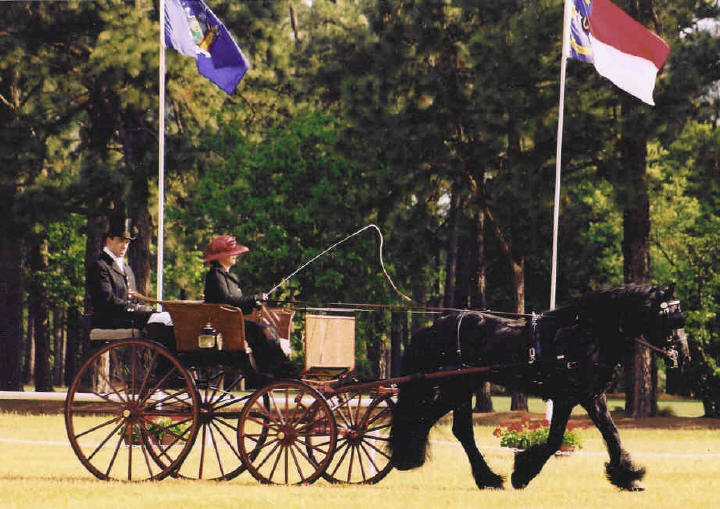