While Mother Nature’s wrath devastated the south in the form of Hurricane Katrina, our area was hit with a deluge.  But while all of this was going on, Laurel Highland Farm had a miracle occur:  the stork dropped off an unexpected, extra heavy load -- TWINS!  Venus and Adonis are out of Guards Blossom (a.k.a. Jasmine) by Waverhead Robbie. 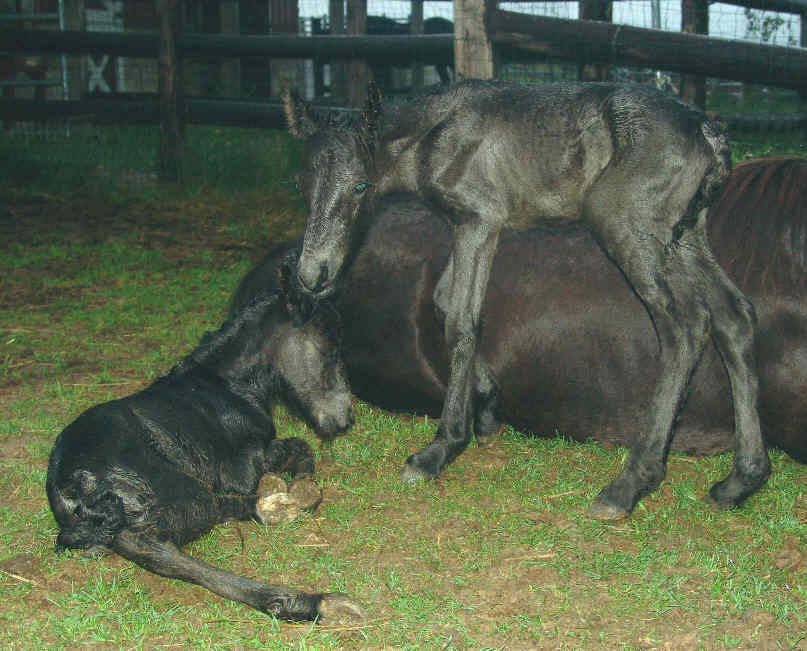 Venus (right) and Adonis (left) at 12 hours old - wet from the hurricane!

Out of about the last 1800 registered Fell pony foals, there have only been 2 sets of registered twins (at Townend and Dene Fell Pony Studs in the UK).  Including our twins, that would make the incidence about 1 pair of live twins in 600 births, so this was a rare event indeed.  The horse is one of the few mammals that cannot readily adjust to carry twins.  The problem is that a single foal requires a large placenta which is just not efficient enough to share the uterus with another fetus.  Less than 10% of twin fetuses make it to term, and only in about 15% of those will both twins survive after birth.  More often than not, one twin is much smaller and weaker than the other, and most often will perish within a week or so of life.  Twins are also dangerous to the mare, resulting in increased complications such as retained placenta.  Normally if twins are diagnosed by 30 days gestation, one of the sacs will be "pinched" by the veterinarian in order to decrease the risks for the dam while increasing the chances the 2nd twin will survive.  This is something we have had to do several times with a Friesian mare known to regularly double-ovulate (which is the source of twins in 95% of equine twin pregnancies.)  However, for a variety of reasons, including being naturally-bred in a herd situation (when the breeding season was essentially over), and also because of the timing of the subsequent Ultrasound (too early. . . and then too late!), this mare's twin pregnancy remained undetected until birth. 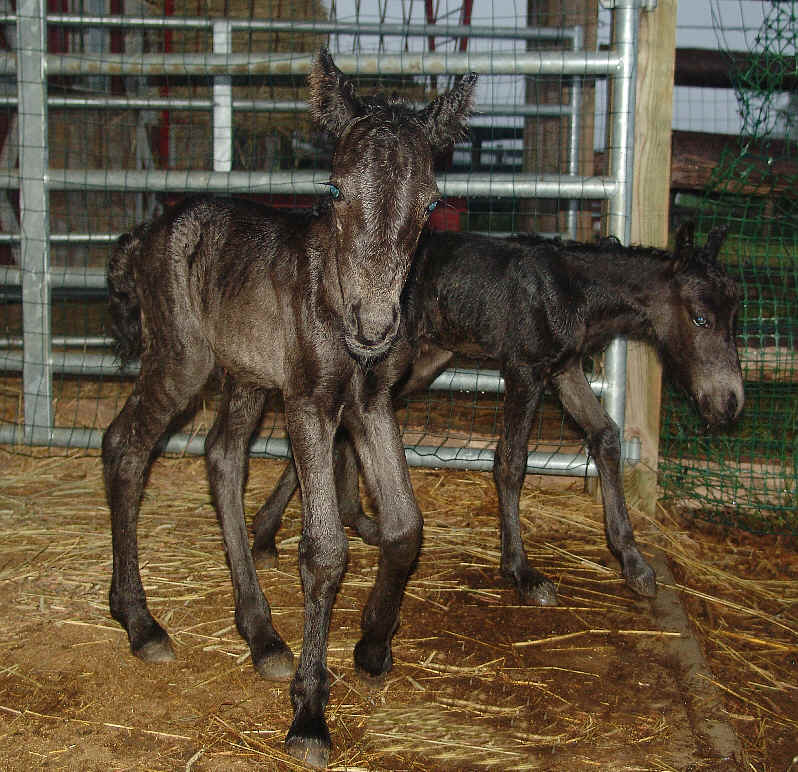 Two nights before the birth, my husband asked our 3 yo daughter Janelle what she thought the mare would have. . . She said, "It's a girl. . . No it's a boy. . . No. . . It's a boy-girl."  Ok, so I guess she is psychic!  The night before, poor Jasmine had the biggest bag of milk I had ever seen on a pony, and could barely walk!  I asked the poor lass, “What are you going to deliver. . . a calf?!”  The next morning, I checked her and I thought labor was imminent, but had to rush off to work.  Sure enough, right after I left, she gave birth.  It was a miracle that my husband happened to be there – he usually is off at work that time of day but because Lauren started kindergarten that week and he was taking her to school so he was around.  Both twins were still in their sacs after delivery and were too weak to make a real effort to break free, so I am sure if Ed had not been there they both would have died right then.  Venus was the larger/stronger of the two.  Adonis was “limp as a dishrag” when he was born, and Ed had to stimulate him to get him to breathe and then to try to stand up.  He lifted him right up and latched him onto his dam to nurse, in order for him to get precious colostrum.  By afternoon Adonis was still weak but getting up on his own to nurse and continued to improve after that.  It helped that his mother seemed to have more milk than a dairy cow!  But his sister had definitely had more than her fair share of the uterus, being better-nourished and nearly straight-legged at birth, while poor little Adonis looked so skinny and crooked from being crammed in a small spot.  Both were structurally sound, and with a little time and activity Adonis’ legs “unfolded” to a more normal appearance. 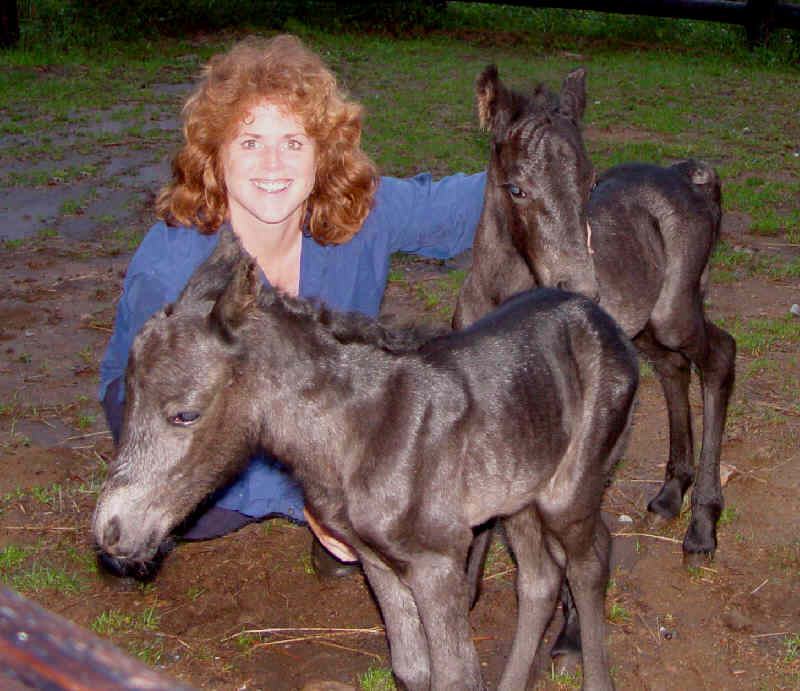 Sadly, Mother Nature's reprieve was far too short and tragedy ensued . . . We lost little Adonis just shy of 5 days old from kidney failure.  The poor little guy was just too small - about 32# or roughly15 kg, which is less than 1/2 the size of a normal newborn Fell - so small I could easily pick him up!  He had been nursing fairly well up until then but not as well as his sister, and being so small he just had no reserve.  In the course of a day he went from being fairly energetic to suddenly weak, and although he tried hard to nurse he just couldn't seem to do it on his own anymore.  Jasmine was easy to milk and he gratefully accepted the supplement I offered.  Nonetheless he continued to rapidly deteriorate, despite IV fluids and medications, too.  By evening he passed away.  We are heartbroken to have lost such a beautiful and friendly colt!  But all the love in the world just wasn't enough to save him.  Just another case of "survival of the fittest" . . . for which Mother Nature had no mercy. . . Perhaps the choice of names was a curse - by all accounts Adonis always seemed to be the "mere mortal" of the two, just like the original tragedy.  In any case, we will never forget the miracle we witnessed with the birth of such a beautiful pair - the sight of them together was just so amazing - a special memory we will always cherish! 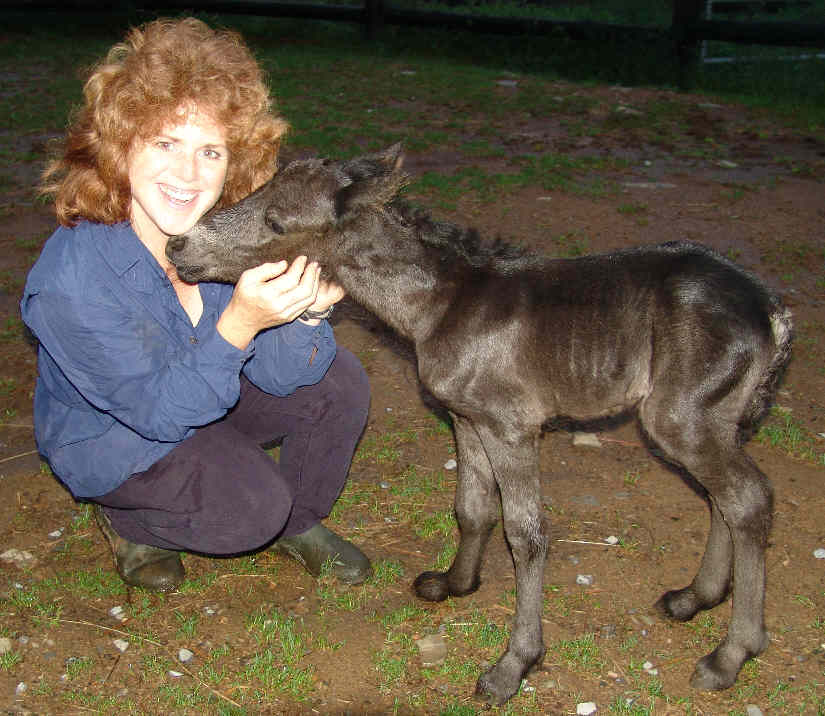 We are very hopeful that Venus will continue to flourish - she is the picture of health right now so her chances are good.  Venus was reserved before conception 5 years ago (!) by Joanna in California, who has been waiting ever patiently for Jasmine to produce a filly for her!  "Good things come to those who wait!"  But surely Joanna has waited long enough :), and we are thus extra hopeful that this precious beauty will one day (finally!) be headed to this wonderful home. 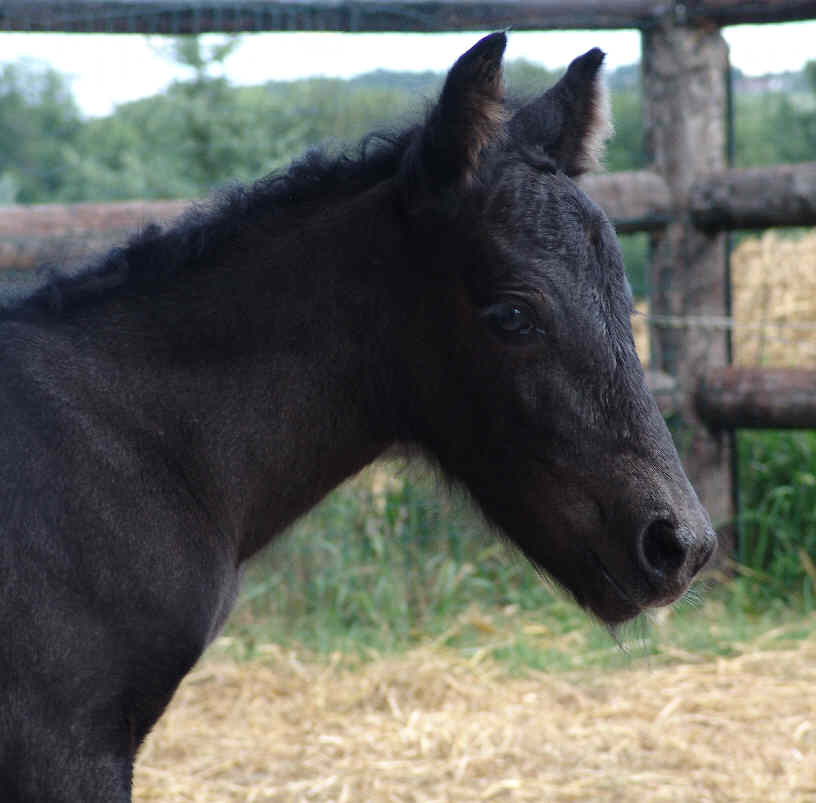 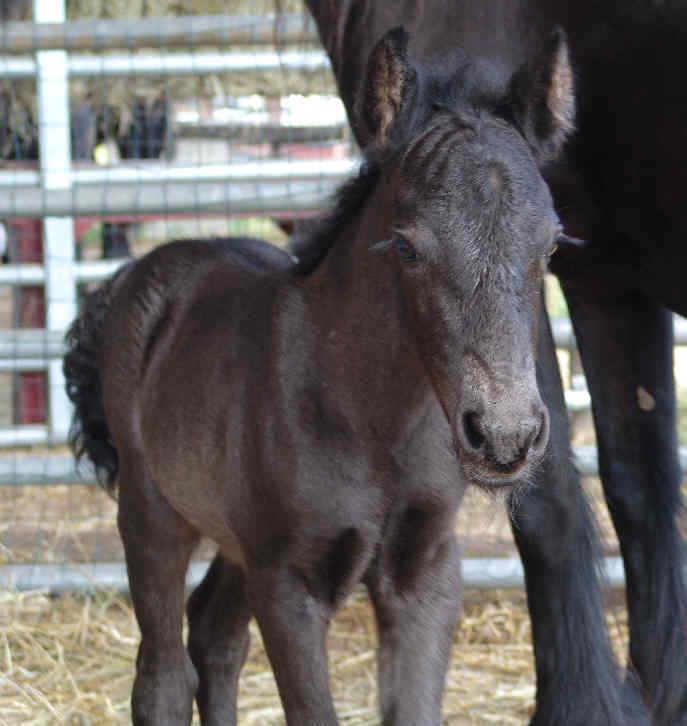 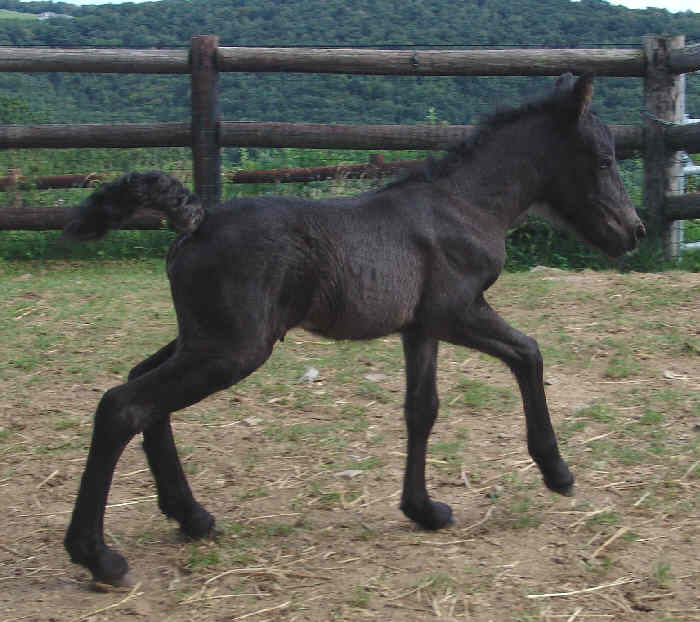 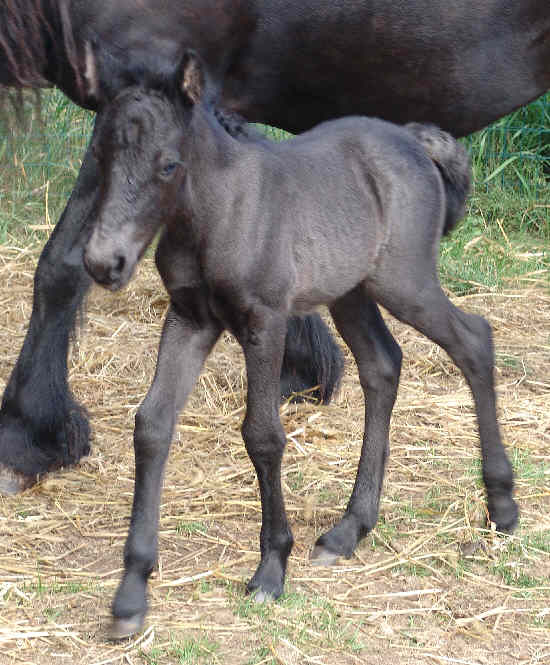 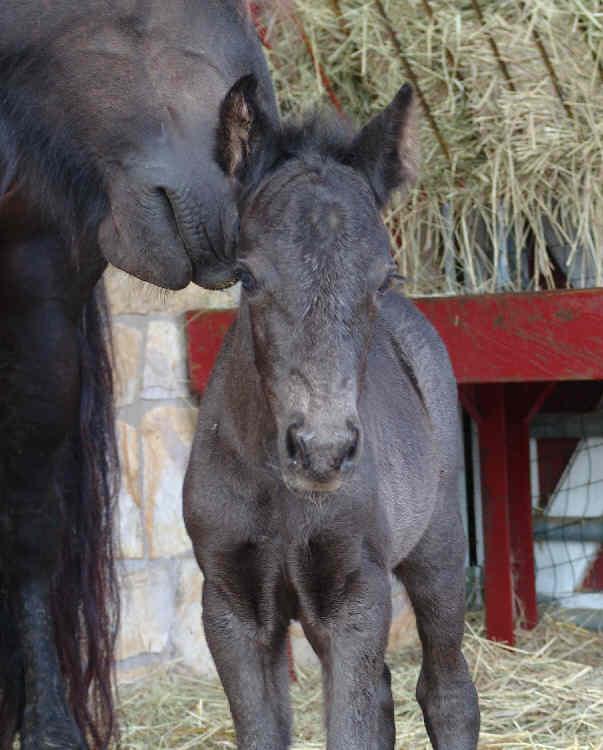 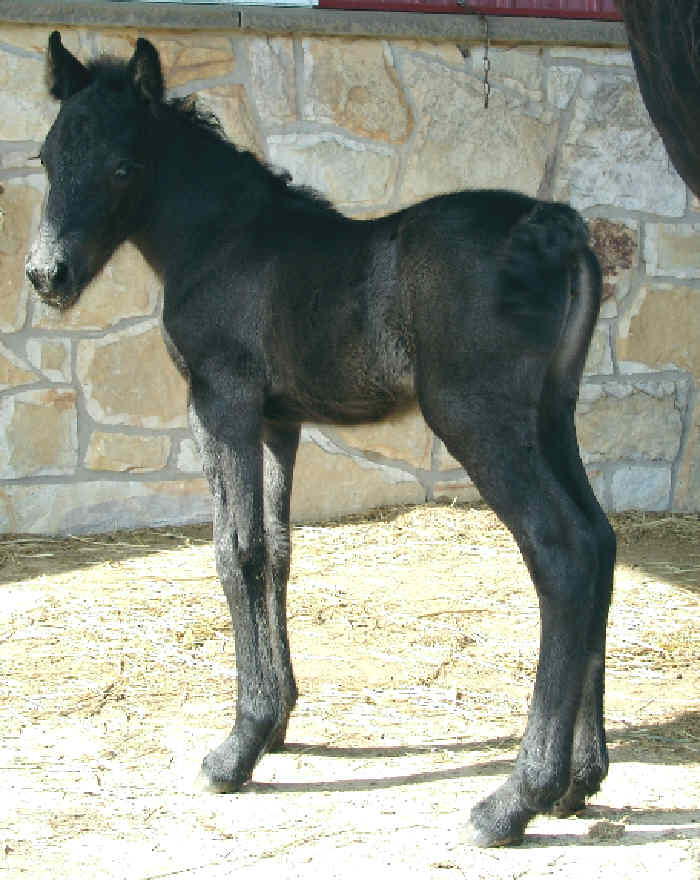